What: Guitarist Joshua Breakstone
When: Sunday, October 27, 2019 at 3pm 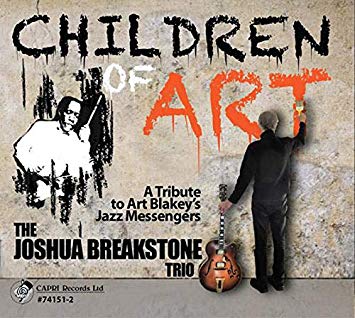 October, 2019 marks the 100th anniversary of the great jazz drummer Art Blakey. Guitarist Joshua Breakstone is touring throughout the US from September to November in support of the release of his new recording on Capri Records, “Children of Art”, a tribute to Art Blakey and the Jazz Messengers. On the new recording, Joshua plays with drummer Eliot Zigmund (well-known from his years with Bill Evans) and bassist Martin Wind (current member of the trios of Bill Mays, Dena DeRose, Bill Cunliffe, Ann Hampton Callaway, Ted Rosenthal, and Matt Wilson’s Quartet “Arts and Crafts”). We are happy to have him as part of his fall ’19 tour, appearing with bassist Marion Hayden and drummer Sean Dobbins.

Thanks to G.R. Therapy Group (Experience a Difference) at www.grandrapidstherapygroup.com .

Due to the statement made by the CDC and the Michigan Department of Health and Human Services regarding the steps we need to take to control the spread of the coronavirus, Adventure Music has cancelled the Mark Robertson and Jack Mouse concert March 29 and the Randy Napoleon Concernt April 26. Sad to have cancel. Look for our next season posting this summer. Dismiss